October 05, 2015
We learn the most from the summits we don't reach
- Scott Gordon 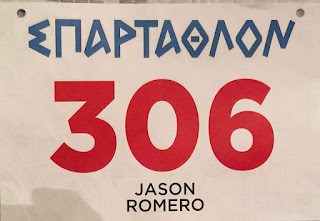 Let me start off by saying this is not an easy post to compose.  I had fully hoped to be writing a post about successfully completing my Triple Crown of Ultra-Running.  I never expected to be staring blankly at my computer dissecting and analyzing what went wrong?

Spartathlon is the Ultimate Test of Ultra-running.  There is no other race like it in the world.  The distance is staggering - 246 Km / 153 Miles.  The environment is taxing with heat, humidity and rain.  The time cut-offs are surreal - the first 50 miles must be completed in 9 1/2 hours and the entire race must be completed within 36 hours.  The best of the best in the world toe the line at Spartathlon, and at best 1/2 of them reach the finish line.  It is a race like no other, and all those that experience it describe it as the "hardest thing I've ever done."

TRAINING:  My training was OK for Spartathlon.  I had completed 3 other ultras in hot environments on pavement (one of 185 miles, one of 135 miles and one of 100 miles).  I had trained for heat and had good strategies to offset the negative effects of the heat and humidity.  I had trained on roads to prepare my bones, joints, muscles, tendons and ligaments.  I had put myself in plenty of mentally taxing situations, that could test the muster of my mental stubbornness.  I did have a hiccup in training after Badwater.  During Badwater, I had a plantar's wart derail my race.  Although I was able to finish the race, I added about 10 hours to my projected finish time, and my foot had been severely bruised as a result of a compensating gait to avoid irritating the wart.  After Badwater, I had the wart chemically burned off with beetle acid.  That laid me up and stopped my running for a good 2 weeks.  With about a month to go before Spartathlon, I was able to resume training.  The 2 weeks of training and 2 weeks of taper felt good, but I wondered whether I lost anything as a result of the time off running treating the wart.

JET LAG:  Originally, I had planned to arrive in Greece the day before the race; then, I came to my senses.  I paid a heavy penalty to the airlines and changed my flight to arrive 3 days before the race.  I had a tough time with adjusting to the time change.  However, I did the best I could.  And frankly, seeing the sights of Athens including the Acropolis was very powerful.  At the end of the day, more rest could have helped….a lot.

TETHERING:  Because I am legally blind, the race organizers required that I always be tethered to another person for safety purposes.  I had never been tethered for a race before; however, my guide and I thought we had figured out a way to make a tether work for the race.  We invented a new type of tether, and it seemed to work well.  The other challenge was that we were attempting to get 2 people across the finish line.  It is hard enough for 1 person to make it, let alone 2.  Well I had the guide of all guides - Brandon Stapanowich (top-10 @ Leadville and Hardrock, 13th at Western States and Nolan's 14 vet, among other things).

NO CREW:  Originally, I was supposed to have a crew.  Then, plans fell through and I was left of go at it with drop bags.  I had never ran a race using drop bags as a support strategy.  I was in new territory, but I knew other people used drop bags so I figured it could be done.

CONFIDENCE:  I had thought I was invincible for much of 2015 . . . thinking that guts and grit could get me through anything, and any situation.  I just needed to endure the pain and push through it.  About 3 weeks before Spartathlon, when I was trying to create a plan to complete the race….it occurred to me that this thing was more of a monster than I realized.  The time cut-offs made this race wholly unique, special and scary.  I was scared.  I had respect for the race, but I found myself questioning my abilities.

THE RACE:  Brandon and I worked very well as a guide and runner combination.  Brandon was accustomed to trails and found the road a new experience.  We made it through the first marathon with 15 minutes to spare as planned.  I also had an irritated stomach, and was forced to ditch my waist belt that I was using to carry a water bottle.  It was causing too much pressure on my stomach.  I had also forgotten to pack a spare battery in my drop bags, so I had to carry a spare battery with me for the entire race.  It became hot during the second marathon; however, I had a cool-off bandana that I loaded with ice.  I was able to keep cool and hydrated.  Brandon had some bouts of double vision during this time due to sleep deprivation and the heat; however, he pulled through.  I was planning to eat aid station food and drink Ensure that I'd packed in drop bags.  I soon realized that I couldn't stop to get a drop bag and collect my Ensure - - - I would be giving back precious minutes.  I was not used to the aid station food - chips, bread, occasional fruit and luke-warm water.  I worked up a vicious case of diarrhea by eating too many raisins, apples, figs and fruit.  We passed the second checkpoint with 1 hour ahead of the cut-off.  We were perfect according to plan.  I carried a backpack with a headlamp, flashlight, some ensure and a bottle of warm Mountain Dew.  One of the race organizers told me I was carrying too much and that I should dump some things.  I did not listen as I should have, and I took off from the check point.  There were various ups and downs over the 3rd marathon.  We had expected to gain more time; however, Brandon and I found ourselves spending move minutes at checkpoints.  We were running well, but wasting time at aid stations.  By this time, we were fatigued, and we would tangle up other runners in our tether at aid stations.  We were also getting frustrated trying to monitor whether we were gaining or losing time against the cut-off.  Soon nightfall came and we were into our 4th marathon.  I was in a mental funk.  When it became dark, all I could think about was going blind.  I prayed and prayed.  I tried to distract myself with all kids of thoughts.  Finally, I found myself crying and blurting out to my guide that "I don't want to go blind!"  What can you say to that?  Brandon did the best he could with a talk off.  And actually, I felt better after saying it.  But then, more excuses came flooding into my head.  My final excuse came about mile 92.  It had started raining a bit and I knew we had a mountain climb at mile 100 over single track with sheer drops.  I reasoned that I shouldn't chance my safety, and my children needed me more than I needed to risk a fall on that mountain.  We were about 20 minutes on the good side of the cur-off at that point.  By the time we got to Mountain Base - mile 100 - we were 1 minute on the good side of the cut-off.  The Garmin read 99.5 miles, and we wanted to make it an even 100 miles……so we continued running uphill to make a solid 100 mile run.

QUITTING:  When it was over…it was bitter-sweet.  It was good to not have to continue on with the pain in my feet, my body, my head, my blurred vision, etc.  It was bitter to not have completed what I had set out to do.  In the hours and days following the experience, I tore apart the entire experience.  There were plenty of excuses for not finishing; but, none of them were the real reason I did not finish.  I did not finish because I quit.  It hurts to say it, but it is the truth.  I could have gone on…..and sitting in my comfortable home in Denver a week after the event I know I could have gone on.  Something happened in that race that stripped me down, snapped me in half and broke me into pieces.  I had quit - - - OUCH THAT HURTS TO SAY! 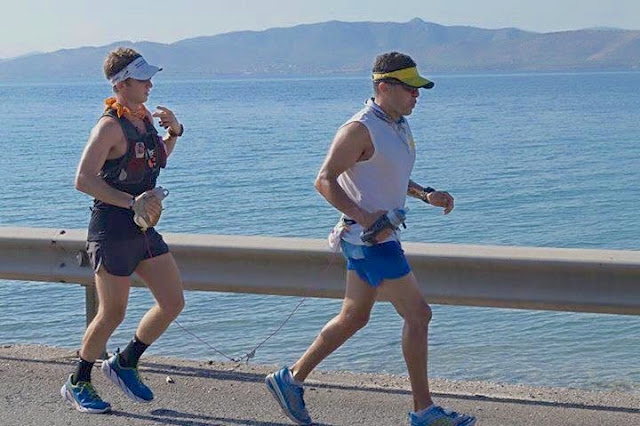 Jason Romero is a highly sought after inspirational speaker and the 1st and only blind person to run across America.  Jason is a member of the US Paralympic Team, holds 11 world records in ultra-running, a former attorney and business executive, and a single father of 3 children.  More information can be found on Jason at www.relentlessromero.com.

Popular posts from this blog

So my first piece of advice would be, “get outdoors and enjoy the fresh air…..you will definitely feel better than running indoors.”   That being said, the fact is that weather can interfere with outdoor running and make it very uncomfortable, if the runner does not have the proper apparel.   Also, it can be difficult for a visually impaired runner to be outdoors….for the VI runner who requires a guide to run outdoors, there can be conflicts with the guides schedule.   Guides cannot just drop what they are doing and support a VI runner’s guiding needs when the VI runner wants to run….this can be a barrier for outdoor running.   Finally, there are hazards out there for the VI runner.   Imagine going outside, closing your eyes and running.   Hazards become pretty apparent – curbs, street sighs, fire hydrants, dog leashes, benches, snow piles, etc.   Pretty much anything can be a hazard, and depending on how much sight the VI runner has the degree of hazard can vary.   Not to be le
Read more

Coming out of the closet: I am Legally Blind 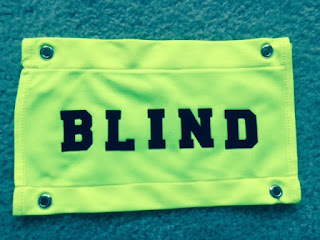 LIVING A LIE, UNTIL YOU CAN FAKE IT NO MORE. I have always heard about the term "coming out of the closet" as it relates to sexual orientation.  I recently realized that I also lived this tortured existence as it related to my visual condition. I have a degenerative eye disease called Retinitis Pigmentosa (RP).  It is a disease that slowly causes your retina to deteriorate; hence, you are slowly robbed of eyesight and eventually end up blind.  I was diagnosed with RP at age 14 and had 20/70 eyesight, some blind spots, full peripheral vision and night blindness.  The doctor who diagnosed me hypothesized that I would be blind by the time I was 30, and that being a doctor or lawyer was out of the question.  I am now 45 with 20/200-400 eyesight, some more blind spots, a 20 degree field of vision and severe night blindness.  It has been quite a journey to get to where I am today, and I am writing this to help those going through sight loss to cope with the journe
Read more 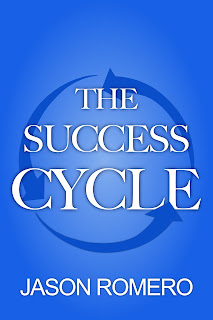 You should write a book! How many times have you uttered or heard these words? It is estimated that less than one-percent of the population will endeavor to publish a book; and of the people who actually start writing a manuscript, only 3% will actually publish their work. I'm not a writer. I'm blind. I don't know how to publish a book. Nobody is going to care about my book, let alone pay good money to buy it. Despite the self-deprecating thoughts I have, I've been fortunate and crazy enough to successfully publish a book ( Running into the Dark ) four years ago. It was a 400-page memoir that included the detailed story of my 3,063 mile run across the US. I was warned by authors and publishing houses to not write a memoir. "Readers only care about memoirs of the President, celebrities and famous people," they would say. Despite being warned, I wrote night and day for 9 months until the manuscript was complete. Then, I found a few editors, an assisted self pu
Read more